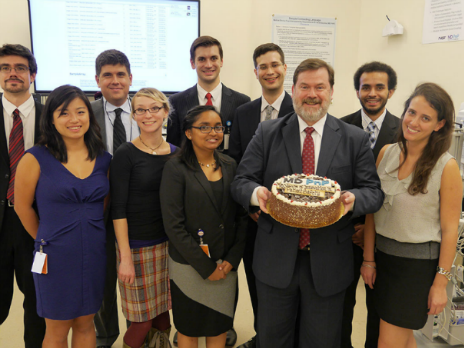 Drayton Freeman
Research & Grants Assistant for the Medical Device Plug-n-Play Program
Prior to joining the MD PnP Team Drayton spent 10 years at Massachusetts General Hospital supporting the Director of the Clinical and Biochemical Pharmacology Laboratory as well as the Anaesthetist-in-Chief for Shriners Hospitals for Children® – Boston.

Systems Engineering Manager, Massachusetts General Hospital
Rick Schrenker provides systems engineering services to the MGH Department of Biomedical Engineering and the MD PnP Program. His interests are on the application of formal systems engineering in health care, focusing in on requirements, validation, assurance, and risk management. He has held clinical engineering and clinical engineering management positions at Johns Hopkins Hospital as well as MGH since entering the field in 1979. Rick holds a BS and MS in electrical engineering from Johns Hopkins University.Rick is active in AAMI and its information technology and medical software standards related efforts. He is a member of the IEEE and its Medical Technology and Policy Committee, as well as the International Council on Systems Engineering (INCOSE) Biomedical Engineering Working Group.

Dave Guffrey [photo coming soon] Dave has an M.S. in Business Management and in Biomedical Engineering
He specializes in clinical systems engineering and medical device/IT Security
He works with the Partners HealthCare Clinical Device and Biomedical Device IntegrationTeam and with the MD PnP program

Ken Auerbach
Database Engineer, MD PnP Program
Ken Auerbach’s academic background is in Theoretical Physics and Mathematics. He has worked as a Computer Scientist at MIT as well as on military projects at MIT Lincoln Lab and Draper Laboratory. He has also held several positions in the Health Care field. He has worked on several health-related research projects, including a semi-Markov computer model to aid in the optimization of resource allocations for Tuberculosis and AIDS prevention and treatment - work that resulted in a paper he co-authored in JAMA. His last position was Project Manager and Database and System Administrator at the Lab for Drug Discovery in Neurodegeneration (LDDN) at the Brigham & Women’s Hospital.

Sue Whitehead
Senior Program Advisor
Sue was our founding Program Manager and served in this critical role from 2004-2014.

Katharine Koury was a Clinical Research Coordinator for the MD PnP Program. Katharine holds a Bachelor of Arts Degree in Psychology from the University of Colorado, Boulder.

Andrea Lenco was our Research & Grants Assistant.
She is a  graduate from the Boston University School of Public Health MPH Program where she studied Maternal and Child Health. Previously, she worked as a Course Manager at Harvard Medical School.

Jeff Plourde was a Lead Software Developer, MD PnP Program
Previously he worked in the hedge fund industry. He holds a BS in Computer Science and a BS in Biology from Rensselaer Polytechnic Institute. 2012-2014


Are you a Subscriber?